Car racing is a passion for most of us. Even thinking about it makes you excited. Who doesn’t like the vroom sound of powerful cars? But running a real car isn’t a piece of cake. Racing games are acknowledged as one of the most popular genres in video games. The first racing video game surfaced around 1974. Gran Track 10 is known to be the first racing game. It was an arcade game developed by Atari. In 1976 the first-person perspective game Night Driver was launched by Atari. In 1983 Pole Position was launched by Namco. It can be considered as the pioneer of modern car racing games. With the evolution in 3D graphics, car racing games benefited a lot. Now they have become more realistic than before. Now you feel yourself actually a part of the race. The cars, the tracks, the sceneries around, and the sounds all make it all worth-experiencing. Very soon after the launch of smartphone devices, most of computer games made their way to mobile phone gaming platforms.  Now many games are launched solely for mobile device platforms. As their initial development is smartphone-centric, so they offer a better gaming experience than a rescaled PC game. Real Racing is one such game.

You start with a basic Formula 1 car in Driver Level 0, you increase level by playing and earning fame points (like XP). You earn Gold coins by each leveling up. Based on the number of fame points earned to reach the next level, you are rewarded from 5 to 100 gold coins accordingly. The game is constituted by multiple series, where each series is subdivided into multiple tiers and each tier into individual races ranging from one to three.

There are three types of currency in the game:

At the end of each race, you need to maintain your car, you can unlock and buy many items with the money you earn by progressing in the game. You can also buy R$, Gold Coins, and M$ with real money by purchasing those directly from Play Store / App Store.

There are seven different ways to control the game involving the different combinations of auto and manual controls. Main controls include steering, brakes, and accelerator. Brakes and steering remain manual but the accelerator can either be manual or automatic. Steering can either be controlled through physical maneuvering of the device or by controlling virtual steering.

Real Racing 3 is loaded with amazing supercars and lots of improvement, enhancements, and upgrades. To get those you have to earn money to purchase and unlock the exciting stuff. If you want to buy your dream car or customization, that is a long way. The Real Racing 3 Mod APK here gives you the option to get unlimited money and gold coin. You get all the cars unlocked right from the start. It’s a directly installable APK file for Android devices that is tested to be 100% safe and free from viruses and malware.

How do you get unlimited gold on Real Racing 3?

By downloading the Real Racing 3 Mod APK you can get unlimited gold and money.

Can Real Racing 3 be played offline?

Yes, but there are many features and game modes that are available online only.

If you are looking for an amazing 3D racing game with stunning graphics and great cars, Real Racing 3 is the right game for you. The game has the best collection of cars and real tracks. With  Real Racing 3 Mod APK you can enjoy the game with every option unlocked. Choose any car, any track, any customizations, and whatnot. 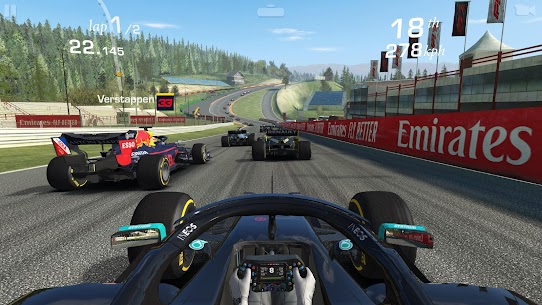